Fic: The Number You Have Dialed 1/?

The Number You have Dialed
By Max


Disclaimer: I don’t own Gundam Wing


Setting: About thirty years after Endless Waltz.  Technology is moving crazy slow, so they’re closer to our level of technology than where I’m usually writing. 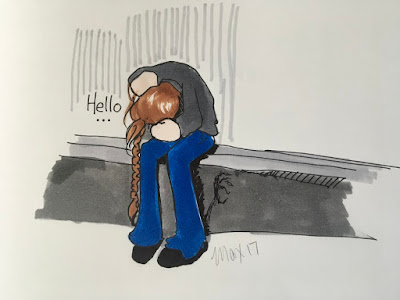 It was a long time ago.


It was March and it was still cold. Duo got off the bus five blocks from the room he rented because that was as close as the bus could get him. The snow had gone, but the rain lurked along the path in dark puddles that were happy to soak into the rolled up cuffs of his jeans.


He’d never gotten much taller after the wars. Quatre had put on nearly six more inches and Trowa had already been tall. No one knew about Wufei. Duo had always imagined that Heero had gotten taller, broader in the shoulders, maybe a tattoo or something from being wild and joining the yakuza, but no one really knew and if they did, they weren’t telling Duo.


Duo had grown wider over the years, but not really in the shoulders. He hunched his shoulders, trying to draw his coat, on which the zipper no longer worked, closer, to make it a little warmer on his walk. Hands in his pocket, his fingers wrapped around his cheap end iphone, that he was likely a year from having paid off and he wondered, maybe, maybe he’d call one more time.


Under his favorite tree, that still had no leaves, but long dark lines of branches like the lines of fate, he stared at the gray sky that promised to rain some more.  There were some promises that you couldn’t avoid and some promises that couldn’t be kept if heaven itself degreed it.


He was gonna get fired again. Maybe that would be a good thing. It wasn’t like he was any good at selling insurance, but he’d known that before he took the job, at least he felt like he’d known that before he took the job now that he was standing up there looking at the grey sky through a the silent branches of a winter tree wearing wet shoes and a coat that there wasn’t much point in repairing anymore. So everyone dies. You wanna get paid when your kid dies?  Have you thought about what happens when you die? So you don’t wanna have to get a payday loan to get your kid’s body out of the morgue do you?


He was shit at selling insurance.


The was a little stone fence by his favorite tree and he sat down. Wet socks, wet cuffs, wet ass, everything was connected anyway so it didn’t really make much difference. He sighed quickly then held his breath, thumb rubbing over the volume controls on his phone, not enough to move the sound of his music, but just for some nervous fidget. He used to be something.


Not that blowing shit up makes you something, but it seemed more like it at the time.


So it was sudden, impulsive, but he pulled his phone out and dialed Heero’s number.


It was just a voicemail message from when Heero and he had been at Preventers, twenty-five years before.  It was an old ring, familiar enough that his heartbeat could pause and wait for the next one.


It’s funny how war and violence leave no room for little flowers, for love and hope, but even in those times, which in the lull between rings, seemed so vivid. “One of these days, I’m gonna stop calling you, Heero,” Duo said to the ring in his ear.


The rain started again, more mist than rain, but it slipped under his braid, soaking into his tee-shirt.


“I’m sorry, I’ve been delayed. There was an unfortunate accident, but I’ll explain everything and make it all up to you to the best of my ability.”


“I’m dreaming,” Duo said, smirking. “Just talk to me a little longer, okay? I doesn’t even have to make sense. Just talk to me, Heero. I’m so alone and everything is so hard.”


“I have your location now. I’m coming to get you.”


“Yeah, sure,” Duo said, walking slowly on towards the house he stayed in, kicking the water a little as he went. “Just keep talking to me. This is the best dream I’ve ever had. I love you, you know? I know?”


“I love you too,” Heero said, slowly, as if he were taking in the state Duo were in. “I didn’t mean for this to happen, but I’m going to make everything okay.”


“You promise,” Duo asked, smirking, wondering how in the hell he was going to go back to his insurance job and do anything other than quit before he got fired. “I don’t even care if I’m making this up in my head. My head hasn’t been useful for anything in a long time anyway.”


“I promise,” Heero said solemnly. “I promise I am going to make everything right.”