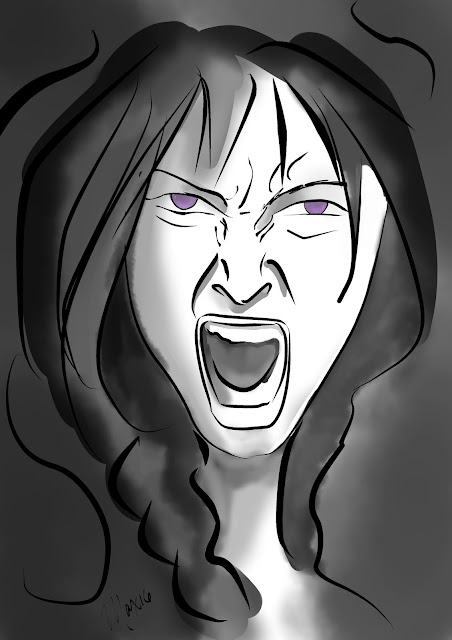 Disclaimer: I don’t own Gundam Wing.

Notes: This is the second time I’ve done this chapter. Usually I write it and bam, it’s done. Because this one connected so very deeply into my own experience, I needed to write it again... clean it up a lot. So let’s see if I can do it right this time.

Warning: This is a violet chapter, likely to be pretty gritty.

It might have been a poor choice, coming back in time to the moment when his mind broke. It might not have been the best choice to leave Duo behind either. See - how this works is we get angry, I come out, I kick someone’s ass or die trying, and then he takes over again and we wander along our merry path. He’s cheery and emotional and caring and he’s got so many things to do. He’s respectable, ish, depending on the environment. He’s the mayor. I’m the serial killer. I’m the darkness that eats the cancer, the never ending rage.

I just wanted to, so fucking badly.

I remember my mom and being safe in her arms. Her tugging at my hair and her voice, even though I don’t know I really knew what the hell she was saying. I remember strawberries and pictures with kittens that moved and purred and her promising me I could have one.

We’re getting a fucking cat when I get home.

I remember the world being a good and wonderful place. It’s like it’s there in my mind and I can pick up the gem of that feeling and hold it and look at it and it’ll never fade.

Some part of me never grew past that moment.

The details of what happened aren’t really relevant. It could have been a lot of things, I guess. A train wreck or a bomb or even some disease we didn’t know how to cure yet. My mom died. I learned to be very afraid. I learned hunger and pain and cold.

It wasn’t a wreck or a bomb though.
I used to sit in Duo’s head and laugh when he’d get into these existential crises. How could he life if he couldn’t tell Heero he liked him, how to cope with having less ‘honor’ after Wufei caught him jacking off,  how to not be a shitbag after novo took over his life - what was the meaning of life? That had seemed so fucking funny at the time.

Sitting in the same courtyard in the same abandoned building, the blood dried on his hands, under his fingernails, on the teeth he was playing with in his left hand - that whole existential shit finally made sense. This had been purpose - this was what I’d been striving for.

Every unfortunate bastard who got in my crossfire had been practice for this.

They raped my mother and burned her alive. There aren’t words for what I did to them because humans aren’t supposed to do things like that.

Those are his job.

Except here I am.

I took so much energy out of the colony for this escapade that I have put them in serious danger.

The teeth fell from his fingers as his hands pressed to his face.  Home was two hundred and fifty years away.  Plague, famine, and wars were between that moment and home.

Sometime after finishing vengeance and getting lucid there had been a daydream of cage fighting and gangsters, of pimps and prostitutes, and building a ship he wanted to call the Black Pearl... being a pirate and sailing up to Camelot with enough energy to save the day.  He’d been so cocky in the daydream, gallant in black leather and powerful in all the things he did with his crew of rescued prostitutes.

But empty of rage, there was no more cocky, no more energy, no more fire. The teeth he’d pulled from his mother’s murders lay on the broken concrete and even those seemed too far away.

“Heero?” Shinigami looked up from where he sat, feeling smaller now, his hair matted to his face, lips parted.

Heero smiled, his hair still cut short like Alexander’s had been. He wore an urban camo tee-shirt and gray pants. He was relaxed, his blue eyes full of amusement. “I hope you weren’t expecting Santa Claus because you’ve been a very bad boy.”  Heero squatted down in front of him and pulled a wet wipe out of the pack he’d been carrying. “It’s okay if I clean you up now, yeah?”
“Why’re you here?” Shinigami said, letting Heero take his hand and start scrubbing the dried blood away.

“It was a couple of days after Duo woke up that I figured out what you’d done. Our distress call had been out for hours and you hadn’t showed back up, so I figured you were in trouble. I love you. I’d follow you into the heart of the sun, if I thought I had a 1% chance of saving you.” Heero moved one finger to the next, efficient and caring.

“Well, I’m an astronautics professor and a soldier, not a poet, Shini. Think of it like this... you and Duo are the same person, but not. You and me and him, we’re the same person, but not - in  different way. I told you I’m not a poet. You never gave up on looking for me. You risked your life. You risked everything to find me, to save me, more times than I can ever count.”

“But... I left Camelot in trouble. All I was thinking about was... killing them for what they did. Am I a murderer?”

“Technically, yes,” Heero said, moving to Shinigami’s other hand. “There have been a hundred thousand human cultures through the centuries. Many of them had different laws and rules about how consequences were meted out. The world we grew up in was not fair nor kind. I believe that all those you have killed were killed because you thought it was the best thing to do. You’re more of an avenging angel than a killer. You are a good man. I’d like to think this is the last act of vengeance for you though. I’d like us to move forward into new experiences.”

“We should find out what happened on The Rage,” Shini said shifting so he was facing Heero. “I .. I don’t know that I’ll just go back in Duo when we get back. I don’t want to break my heart or his.”

“So?” Heero said, grinning. “I can’t say that I haven’t thought about having two tongues on my cock.”

Shini giggled, which turned into a laugh. “You are so bad.”

“Yeah? Look who’s talking. Do you still want to make a ship called the Black Pearl?”

“It was a fun fantasy,” Shini said, his clean hand brushing over Heero’s hair. “I don’t really feel like being a deadly pirate right now though.”

Heero came up to kiss him, gentle and loving. “That’s okay with me. I’m sure we’ll figure out ways to keep busy.”

“I love you. I’m sorry I’m insane,” Duo said, between kissing back.

“I love you too,” Heero said, “I don’t think you’re insane. I think you’re coping with trauma. You saw them murder your mom. I think you are the strongest and most wonderful person I can imagine.”

“If anyone else said that, I’d think they were full of shit,” Shinigami said, his thumb brushing over Heero’s lips, “But when you say it, I can believe it.”

“Good. We should move. When you stand up, it’s going to hurt.” Heero pointed to the remains of the second bounty hunter. “You won, but it wasn’t exactly cut and dried.  He busted your leg and stabbed you twice. It’s difficult to give you medical care when you’re delirious.”

Shinii let Heero slide an arm around his back, hold most of his weight as they stood. “I’m lucky you came for me. I did hallucinate something awful and the comedown was pretty bad.”

A couple of steps away, Shinigami hesitated. “Wait... I want those teeth.”

“I’ll get them, but you need to sit down,” Heero said.

“Okay,” Shini agreed, watching Heero go and pick up the most gruesome souvenirs ever.

Shortest existential crisis ever. This was his meaning of life. “I love you. Did I mention that?”