By Max
Disclaimer: I don’t own Gundam Wing or Xmen.  This is my daydream, my safe place. If you want to be here, welcome. :) If you don’t like it, please go find something you like better.

Duo woke with a headache the size of Euroasia and a feeling of alone more intense than anything he could remember feeling. He felt so alone... That maybe he was dead and beyond the reach of other people. There was always an extra hum in his head, a voice he couldn’t quite hear most of the time. It was his sense of humor, his sense of safety, of irony and there was usually a subtext of violence and sex... But now it was silent.


He imagined himself on his meditation plane, a great blue space with a blue floor and a sky like Earth, but closer and more welcoming. “Hello!?”


“Hello,” a feminine voice said, unfamiliar to him, but with the kind of tone that suggested she felt familiar with him.


His eyes opened to little violet slits that tracked her like a cat of prey trying to decide if it was hungry.


She brushed dark bangs out of his face like he was a tabby. “We need to get you a haircut, Daton. I’ve turned down the sedation so waking up should be easier in a moment.”


Unease and darkness tugged at him. “Who the fuck are you?” His voice sounded hoarse, rough. As he came more to, his whole body hurt like someone had used him the ball in a fucking ping pong game.


He and Heero had been just coming home from his day at city hall. Julia had met them... She’d been upset. There had just been too many changes in the household. He needed to keep things calm for her. “Where’s Heero?”


“He went with Quatre to the spaceship to get some medical equipment I asked for. No, don’t try to sit up yet. I’m still running some diagnostics.”


Duo laid back down, but he still wasn’t feeling like being compliant and his trust meter wasn’t floating high. “So ... Again. Who the fuck are you?”


“I’m Dr. Mercy Reigh,” she said proudly, reaching for his hand, holding it even as he tried to tug away. “I’m your mother.”


“That’s bullshit,” he said, tugging his hand away and sitting up. Angrily, he started pulling at the sensors on his head.  “My mother is dead... If I ever had one at all. What the fuck do you want? Julia! Julia Maxwell... Get in here right now!”


Julia stuck his head in through the tent flap, lower lip between his teeth, violet eyes wide and a little afraid.


Duo’s hand covered his mouth, squeezing his mouth as he stared at his twin brother. “Julia. Come here.”


Julia took a couple steps towards the bed where Duo sat, hesitated, than ran to him as if he were in the body of a five year old still. He wrapped his arms around Duo holding him with all his strength. “Daddy! I’m sorry! I didn’t mean to! I’m sorry! Are you okay? I want you to be okay!”


Julia let go a little, staring at him with a tear streaked face. “Are you mad at me?”


“Honey,” he said, brushing his fingers over a face that was disturbingly the same as his. “I love you. If I’m mad, it’s only because I’m scared for you. I know you wouldn't ever hurt anyone. Tell me what happened?”


“We wanted you to have your mom for the wedding!”


“Okay,” Duo said nodding slowly, telling himself it would be a very bad idea to vomit while fulfilling his parental duties. “Saphron was listening when Q told e about the time travel, wasn’t she?”


Julia nodded, hiding his face against Duo’s chest. “But... She got so upset when the bad men hurt your mom. You were so little. I tried to help you. I tried. I made the computer hide you. I didn’t tell no one I did it. I just hide you so they couldn’t find you! I love you!”


“That’s okay,” Duo said, soothing fingers brushing over tear damp bangs, his thumb rubbing against a temple. “So why you in my body?”


“I see,” Duo said, rubbing his nose, pressing his thumb between his eyes. “Are you okay? You’re not hurt?”


“No, Daddy, but Saphron is still very sad. Roy says she’s never seen monsters before and I think her mind is broke now.  Jacob is watching her all the time.”


“Wull,” Duo said, scratching behind Julia’s ear. “Monsters kinda do that. I’ll talk to her.”


“Honey, I’ll be your daddy no matter what you do with YOUR hair.” He leaned a little and smiled at Mercy, “So, Granny, you can give your grandson a hair cut. Touch my hair and I’ll hurt you.” He winked like he was playing, though he really wasn’t. “Also. My name is Duo. Not Daton.”


She put her hands on the bed, leaned close to him, violet eyes glaring into violet eyes. “You are my son. Nothing will ever change that. I love you very much, Duo.”


“As if that makes any difference? Now, lay down. I need more diagnostics. I’m not going to let you die.”


After like half a minute of no response, Duo scowled and said louder, “Galen!”


Charlotte slipped into the tent then, carrying a tray with a sandwich and some tea. “The computer system is running on emergency power, so there is no verbal interface. Galen sent out a distress call before going into lower power mode.”


Duo grabbed up the sandwich, sitting on the bed as he shoved sandwich in his mouth with one hand and pulling sensors from his head with the other. “Any serious injuries?”


“No, but your house is toothpicks. After Mercy was respawned, Chang Sung attacked. Julia spawned a physical body because Sung killed her originating body. Julia killed Sung’s body, but he pulled energy and respawned. That energy drain has crippled the colony. I don’t think anyone is going to come and help us, Duo... we’re not an official colony... the Earthsphere government has already declined assistance.”


“Yeah? Well, there ain’t much love lost between me and ‘Lena. Get me a console. Julia - you attacked Sung?”


Julia nodded, eyes big, though her ‘I’m an angel’ look wasn’t nearly as effect on Duo’s adult face. “I put a screwdriver into the base of his spine, then stirred his brains up a bit.”


“Yeah. He said he was going to kill everyone.”


“Good job. Unlimited ponies for you!” Duo said, smiling, pretending he wasn’t disturbed by seeing himself bounce at the end of the bed over playing My Little Pony. “Go tell Saphron to come here.”


“Yes, Daddy,” Julia said before jumping off the bed and running out of the tent.


Charlotte was just returning with Jacob’s communication device. “Jacob said this has computer access, but it’s the only thing in the camp that does.”


“Dat’ll work,” Duo said, giving her a flirty wink. Focusing on the screen, he asked, “And you? What did you do in the battle?”


“Uh,” Charlotte said, caught off guard. “Do you want another sandwich?”


Duo looked up, violet eyes pinning her. “What did you do, Charlie?”“I used some weapons I brought into the colony without declaring them,” she sighed, “I am also tasked with protecting you.”


“Thank you. I appreciate you and your strengths. Anything else you want to disclose during this period of amnesty?”


Mercy watched them with great interest.


Duo’s fingers kept working on the screen. “Why are you turning red?”


“It’s personal!” Charlotte crossed her arms stubbornly. “I don’t have anything else that you are entitled to know.”


“What? You got three tits or something?” He smirked, enjoying making her uncomfortable, even as he felt ashamed of himself.


Mercy tapped him lightly on the back of the head. “Don’t talk like that!”


His gaze swung to Mercy, eyes angry. “Don’t you fuckin’ touch me! I’ll speak how I fuckin’ want, you hear me? I’m dead serious, Mercy. Don’t touch me.”


“What happened to you? Who hurt you so badly?


“Wull, that would be none of yer fuckin’ business,” he turned back to Charlotte. “Charlie, just don’t hide weapons from me, or skills. You’re highly skilled in combat, right?”


“Yes,” she said, standing contritely. “I just wanted to help with the kids and go to medical school. I didn’t mean to deceive you.”


“We’re good, Charlie. Go get me a couple more sandwiches and a pot of coffee.” Galen suddenly appeared, looking a little surprised. “Duo! What is this?” He immediately set about looking at the medical gear. “What is this? This is so outdated! Who did this?”


“Where did you get the energy,” Charlotte gasped.


Duo tossed Jacob’s communication device back to her. “Well, I told you not to hide things, not that I don’t hide things.” He winked again, and then Saphron was slipping into the tent.


Galen’s hands moved around Duo’s head, touching a barely visible swarm of lights, a network that might have been neuronal patterning. “Duo... your mindfile is ... there are no empty spaces. The tumor is gone.”


Duo’s stomach fell away. His head went light. The feeling of emptiness felt connected. He turned to look at Mercy. “What did you do?” 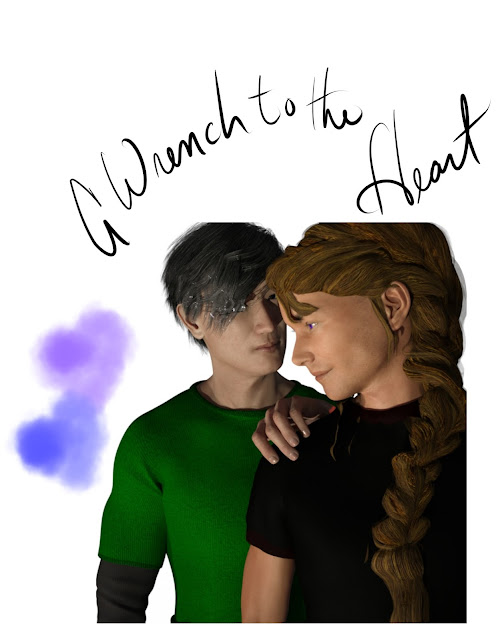 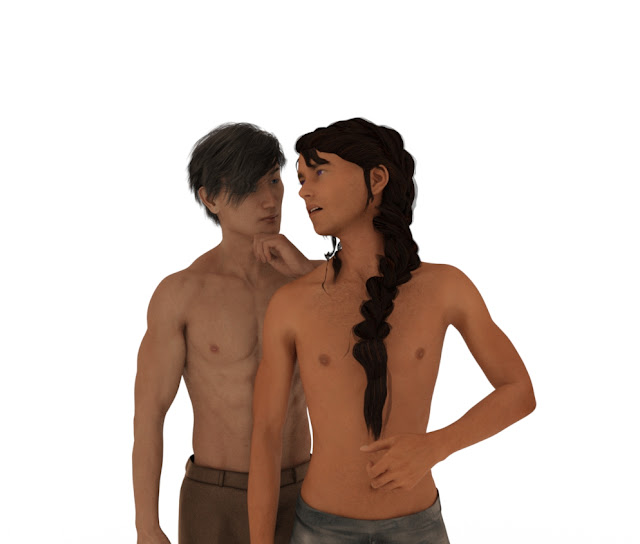 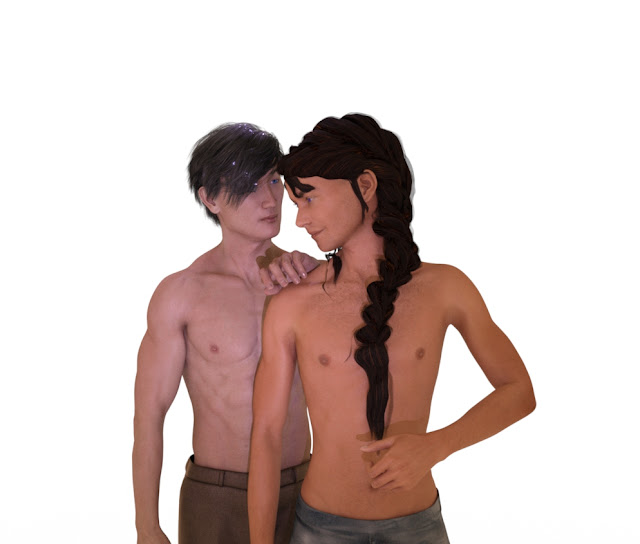 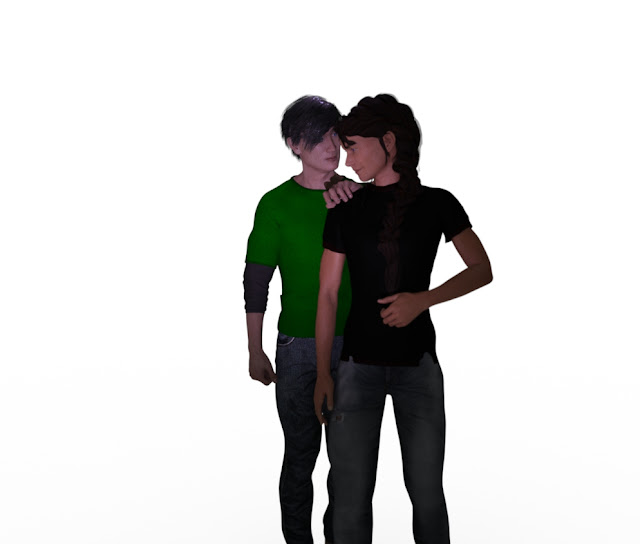 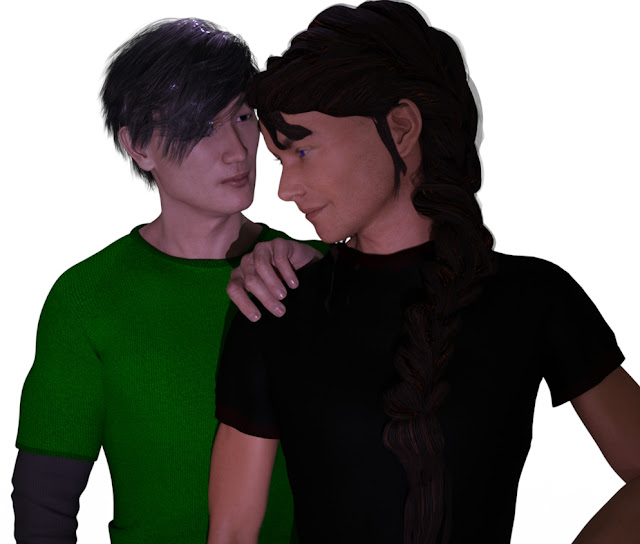 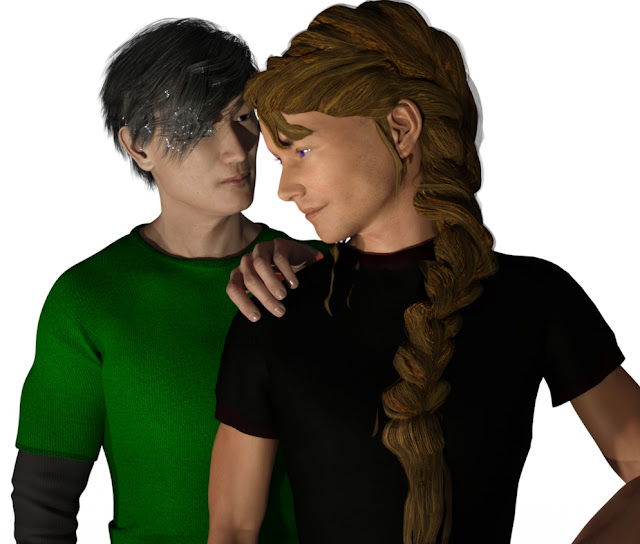 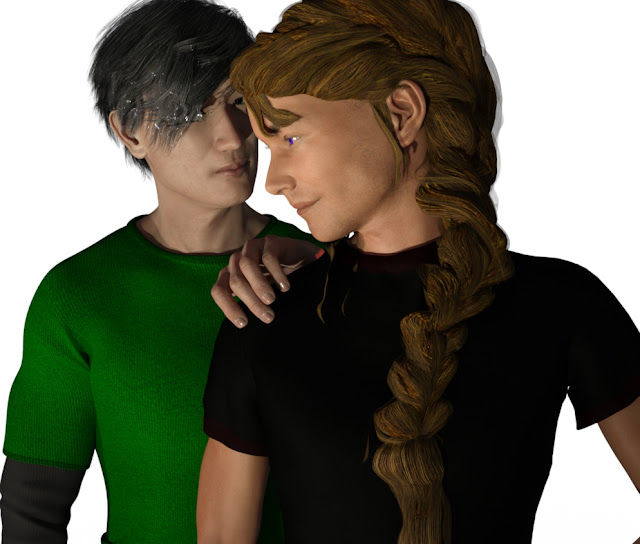 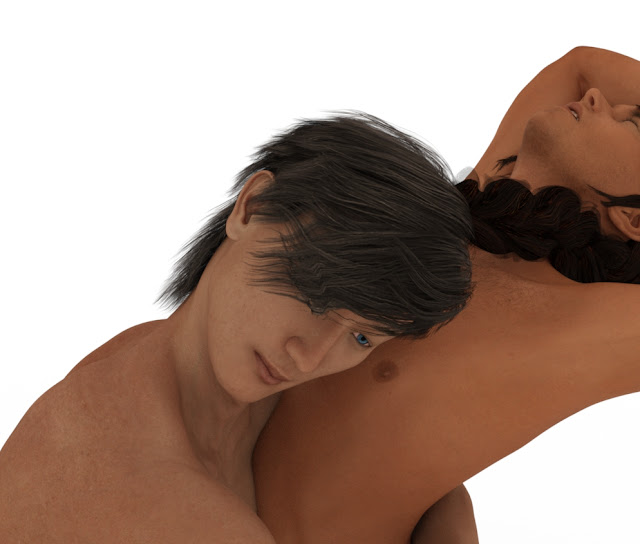