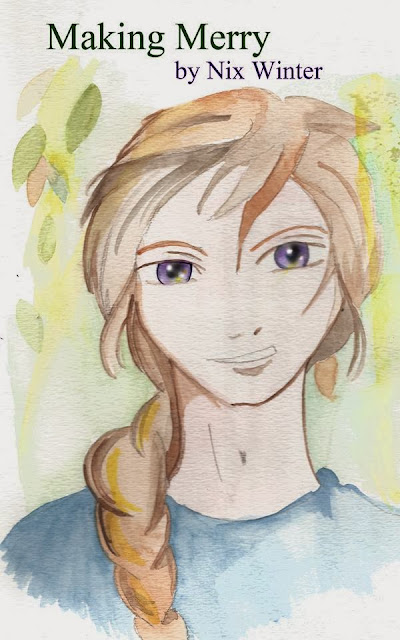 
A comic with the characters:
http://www.faithinthemoon.com/2013/10/comic-merryrobinaddison-spying.html


Note: OH my goodness! This book has been a long time coming! I started this book when I started transition therapy. That’s been almost two years ago and I haven’t released a book I was really confident in between then and now. The thoughts around that whole process could be a book of their own! Still today.. I want to share this story with you. It’s not completely perfect. There’s more to the story. The story didn’t go exactly as I wanted it to. Someone once compared my work to wabi sabi. That really resonated with me... not the transience, because I’m not really into that.. but imperfection.  Longing for perfection can lead to silence and fear. Making Merry is an important story for me.  I’m so not done working with these characters, but I’m super thrilled to be able to share this bit of story with you!


Blurb:   There are secrets in Sherwood, whispers of story that will never be spoken of again. Meriden de Borne is Marian’s twin brother. While many were gone to the crusade, Merry stayed home. The son of the late sheriff, he protects Nottingham with all his will and strength. Using the fairy blood he inherited from his mother, he heals and guides, which brings its own set of risks.


Robin has his heart, but the new Sheriff that King John appointed wants everything else. Love seems farther away than he’d ever imagined.


The secrets that Sherwood holds are going to make him or break him - let alone what they’re going to do to his heart.


Excerpt: “Oak,” he whispered, buckling on his sword belt.  His hand disappeared into thick fog as he bent to pick up his torch from where he’d left it on the stones paving the front of his little house. With it in his hand, he pulled his door shut, jiggering the latch so it would stay closed while he patrolled. Throat tight, had one task and then another to do, so he did not need mind the darkness. First task was to make it to the middle fire and get his torch lit.


The moon was bright enough that he could watch the thick fog swirl around his legs as he walked. The middle fire was a great stone braced fire pit where all could rekindle fire and food could be prepared for the village as a group. The village was closed in for the night, shutters closed and doors barred up. By way of account books, just adding up things he could see and measure, all was in order, but the whispers of the forest swore otherwise. His torch coughed and sputtered, the fire finding its footing slowly, but with the moon as willing as it was, he didn’t really need it.


Just seeing the fire, would back away any wolves that though to visit. Telling himself he was oak, he started the path that wound through the center of the village and around, passed the well and shared fields. He wore soft boots and on the hard fall ground, his foot falls made no sound. There was only the bell he wore and the crackling of fire on pitch.


In the fields where the bees were kept this year, less than a candle mark from his home and the warm comfort of his fire, the fog moved in ways that fog can’t. Blue eyes stared at him. Dark blue eyes that caught moonlight and bent nature to their will.  Wolf.


“Be gone! We’ve nothing for you here!” Merry glared right back at the trespasser.


Lone wolves ran from fire. Pack wolves knew courage or at least trust in their mates that built them more dangerously than they might have been otherwise. Slowly, with intelligence and purpose, the great white padded forward into the fogless space that existed around Merry.


Merry felt the forest settle around his shoulders like armor, the very will of life, a deep pact between the shaman and the forest, man and wild. Moonlight clung to his outstretched hand, shimmer of harbored potential. The torch cast sharp shadows over his face, darkening blue to violet. His braid lay heavy on his back, mark of his commitment to the forest and to his people.


The wolf walked around him, watching him, circling him, unafraid of his fire or the forest’s blessing. He turned with it, never letting it see his back.


Knowledge settles into the pit of one’s stomach when it’s unwanted. “Robin. Let me help you.”