Note: I was just writing along and this needed to be in there. I hope it’s at least a little fun for someone other than me :)


“Hey! Macy!”  Duo shouted as he stuck his head in the back of the vet’s clinic. “I got something for ya!”

The vet assistant, a  young Arapaho man, opened the door to the back exam room and glared. He was tall, lean, well built, with a long black braid with dark intelligent and distrustful eyes. “What disease and pestilence have you brought us today, Maxwell?”

BC crossed his arms. “You gonna make an appointment?”

An older woman, also Arapaho, missing an eye, with a couple of gold teeth. “Duo?”

“We have talked about you missing school, have we not?”“Yuh, yeah, but I found some cats... in the old garage. That place is creepy as fuck, I gotta tell ya.” Duo’s face darkened, “They were lookin like theyweretorturedandIkinawannakillsomeone. Soooooooooo I was hopin you might help me with’em.” Duo grinned brightly, innocent as naturally occurring arsenic.

“You need to stay out of that place,” Doc said. “How many cats?” She started gathering supplies.

“Pull your car back by the barn. They’ll have to go into isolation for a while. Are they ferral?”

“Yeah, ‘cept for one. I think it’s Mrs. Anderson’s missing black. Still got a collar on.”

“If it’s Claire, she’s going to be happy to have her home.”

“She’s missing an eye,” Duo said with a wince.


“Bastards. Okay, back to the barn. I’ll be there in a moment. BC, help Duo move them. Get some gloves on. They’re probably all kinds of infected.”

Duo’s car was a black Mustang that he’d built up out of parts from the junkyard.  It looked pretty standard, until one really looked at it. It only got tags because the local DMV clerk was Mary’s cousin and Duo promised to fix her pond pump. That it would do two-twenty on the straight aways was something Duo failed to mention to anyone other than Heero. It wasn’t like he could go over the county line without setting off his ankle bracelet.

Heero’s probation had already ended and he had his off, so Heero could take it across the back of the reservation and he’d done it once, but didn’t seem to care if Duo wasn’t asking for a test run that he couldn’t do.

One thing the car hadn’t ever been designed for was hauling a trunk full of pissed wild cats. Duo had boxed them up separately, as much as he could, but opening the trunk still wasn’t pretty. BC snarled when he saw them, but there was no more animosity between he and Duo.  They just had small lives to take care of.<><>

“I found some cats.  Macy fixed me up,” he held up both arms, both  forearms and his cheek wrapped around with bandages. “This town got some funky ass tradition about burning cats? That’s what Macy said.”

The whole family was in the kitchen, making dinner and completing baking. It was a very big kitchen.“That was a long time ago,” Allen said firmly. “No one does that anymore.” “Yeah? Well some fucker was stockpiling cats and they weren’t plannin a fundraiser.”

Heero came in the back door, wearing just black shorts and his old green tee-shirt, having showered in the milk barn because he didn’t like to track anything into the house.
Seeing him like that brought a wave of history over Duo, blood and misery, hunger and death, as bright and vivid as those moments of his life had never changed.  He hadn’t even thought about moving to the counter, but there he was, fingers wrapping around a steak knife that had been left on the counter. Violet eyes narrowed, darkened, and the room darkened for Duo. He was in a compromised safe house,  alone, Alliance soldiers were clearing the place, room by room, each sound echoing back from his memory, panic closing his throat. Heero had already left, already gotten out - he knew he had, but there were squatters in this place too. The place was old, not from time, but from abandonment and neglect and he harmonized with the place, had from the first moment he saw it. That it was full of squatters, Earth refuse - just like the people he’d run with on L2 - that had only made it more appealing. He’d brought the hell down on new people - again. God, he hated everyone and himself most of all, but there he stood, feet rooted to the ground, unable to run for it, unable to go on the attack. He was out numbered and now there was Heero to think about. They’d been lovers for a couple months, but it meant the world to Duo and he couldn’t throw his life away crashing against the enemy forces moving towards him in the house - but they were killing the people who had become his friends - if any of them were in the building still and their kind caused there to be places like this in the first place. The knife in his hand flipped around, the cold sharp steel of it laying against his arm as he snarled, planning his attack at the slightest movement. Only thoughts of Heero kept him from throwing himself at the enemy, an angry tidal wave against a sea wall too tall and thick to be taken down without thought and cunning. “Mama Martha!” Annalise shouted as she ran into the room. “Mama!”Duo’s eyes had gone wide and white, pupils tiny dots.

Heero grabbed him, pinned the arm with the knife behind him, applying pressure until the blade dropped. “Duo,” he said, voice low, a war time whisper. “We’re clear. We’re clear.”“Clear,” Duo replied, body tight against Heero. “I didn’t save them.”“You saved others. You did right. I am proud of you. We are in the kitchen. Martha, Mary, M(2), Allen, and Annalise are here. We’re making dinner.”

“Dinner,” Duo said, dull, face hidden against Heero’s chest. “This shirt smells... different.”“I just washed it, but it might smell a little like pigs.”“Sandy,” Duo said, a smile slipping into his voice as he looked up at Heero. “I love my friends.” “I know you do,” Heero said, giving Duo’s forehead a kiss. “Today has been difficult for you. Let’s go see Sandy. Are you ready to test your device?”Light came completely back into Duo’s eyes, his face lifting as if he weren’t still held in a restraining hug. “Maybe. Are you reading to see me fail a couple of times?”“You never fail. You just find ways that don’t work.” “I want to see this device, if that’s not too intrusive,” Allen said, a hand still on the tranqulizer gun hidden under the main table. “Yeah! Sure,” Duo said, wiggling in Heero’s arms. Heero let him go, then reached down to pick up the knife, dip it in the sanitizer solution, then hang it back up, inside the cabinet door and out of sight. “Can we do all this after dinner,” M(2) said with a nice veneer of patience.

“Yeah, sure,” Duo said, “Give me and Heero a chance to get it set up. This is gonna be awesome!”“Duo’s not gonna go to sleep right now,” Annalise asked, looking from one parent to another.


“Not right now.” M(2) said with a smile.“Good! I wanna talk to the piggy too!” Annalise ran around the table and grabbed Duo’s hand. “Piggy!”Duo grinned, reached out for her. “How about a piggy back ride?”“Yes!!!!!”Duo went to one knee and only then did Heero take a deep breath.  Allen gave him a weak, apologetic smile.Heero decided he was going to burn these clothes. 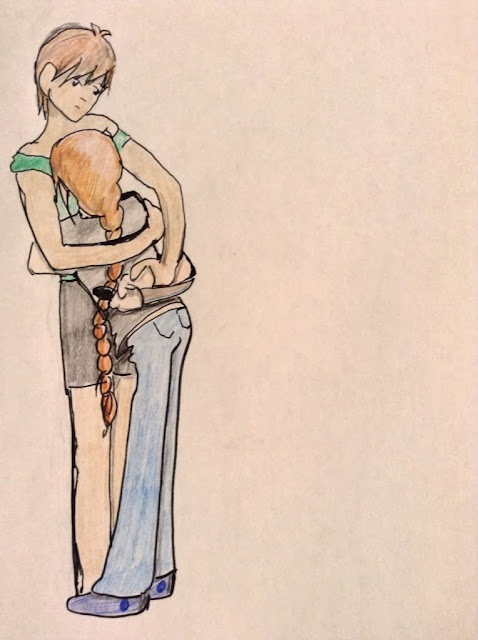