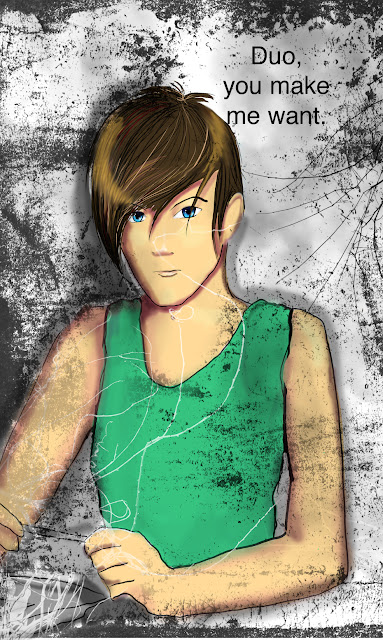 It was a single strand of hair. Heero slipped a finger under the long dark strand. Duo was always careful to wipe up his hair in the bathroom, everywhere. He'd never actually touched Duo's hair before, but there it was, a single very long almost russet hair hanging over his finger like... like something Heero couldn't rationalize or verbalize to himself.

It was just a single strand of hair, not exactly useful data or a case of ammunition. It wasn't valuable. It shouldn't have been left around as evidence, and yet, standing there in the safe house, the studio that he had been sharing with Duo on this mission, the gloom of the blacked out bathroom window, the drawn blinds and that hair felt like it was made out of electricity.

That hair grew to feel heavy. Goosebumps made him feel strange. His heart beat too fast, felt larger than it had ever been, even in pressure training.  He was supposed to be sleeping. That was what he'd scheduled for this period, but then he'd laid down on the bed and found this single little whisper of Duo's presence. He could smell the scent of Duo's sweat, of the ejaculate that Duo had left very faint traces of in the bed when he'd masturbated during the night, could smell the faint hint of vanilla shampoo stolen from some store some where.

Heero blinked, almost panicked by his own surprise and he reached down to touch the front of his shorts. His penis was hard. Blue eyes opened even wider, the feeling of panic rose. The very intense training and very narrow parameters of his behavioral conditioning... broke. He wanted.

Duo talked too much, in general, shared too much. He'd once said that he stole Deathscythe to prevent the weapon from being misused, by Duo's moral code, at least.  Heero classified himself as a weapon. Duo could steal him too. In perhaps the first selfish and impetuous thing Heero had done since Dr. J undertook his training, Heero ate that single strand of hair.

With the hand he'd been holding that single illicit hair, he drew down his shorts, slide his hand over his penis, gliding, very light, because that's what felt good and because that's what Duo had done.  Want became a fire and he took a nearly silent, but deep gasping breath.

When he came, it was small, barely a splash and so fast it took only a few strokes of his hand. The training team was far away though, they couldn't punish him, but at that moment, he really didn't care. He pulled his shorts back up, his thoughts clearing... clearing in entirely new directions. He wanted to survive the war and make Duo happy, maybe have the chance of having Duo enjoy being around him.

Then it occurred to him that there had been 729 days since he'd met Duo. He could buy him a gift. It would also be an American holiday the following day, the American holiday of romance. He would buy Duo a gift, to announce his intentions.

The smile that seized his face felt strange, but strange in a good way. Quickly, he dressed in civilian clothes, jeans and a tee-shirt, picked a decent id, cash that would be good for this city.

As he walked down the street, another change he noticed and wasn't sure how to deal with was the he felt like he fit in... like he was the same as all the other people walking around him. He shoved his hands in his pockets the way Duo sometimes did and imagined them having a house together, a house that would echo with Duo's laughter and chatter.

Then he saw the black cupcake. Whatever programming he'd had about not wanting things - it was gone now.  Face still a complete poker face, he stepped into the shop.  "I would like two of these cakes," he pointed to the black cupcake with the tiny red heart on top.

"Sure," a cheerful girl said. "For your Valentine?"

"We have cards and stuff, if you need it," she said, as she boxed up the cupcakes. "First girlfriend or boyfriend?"

"Yes," he said, looking through the cards. He didn't want to give Duo something that he couldn't keep.

She rang him up. He paid.

He stopped at a book store, read a book on romance and seduction, read another on gay sex, then left before someone could get in their mind that they should come help him.

Six hours remained until Duo was due from his mission.

Heero worked, working very diligently on work that his controlling team could see.

Heero finally understood what an upset stomach was, outside of medical side effects.

On the ninth hour, he wasn't sure that the war hadn't completely shifted. Peace for everyone was a lovely goal, but right then, he'd settle for doing extreme bodily harm to whoever was detaining Duo. Then there was someone on the stairs, limping, determined, and Heero knew it was Duo.
Then Heero understood elation, the feeling of a soul flying. It came as an even greater shock that he felt like he had a soul. It was just an illusion. He knew this. It didn't matter that it was illusion. He felt his soul soar now that Duo was coming up the stairs. Moving with socially unacceptable speed, he put food into the microwave.

When Duo opened the door, Heero kept all emotion off his face. He was going to kill people over this. Side mission.  "I heard you coming up the stairs."

"Sorry," Duo hissed then limped towards the tiny bathroom.

Watching Duo study himself in the mirror, Heero's emotions went to a place that he couldn't even describe. It was as if the soul he didn't believe he had turned into a thick grey storm cloud. Want drove him into the bathroom behind Duo and they both studied the battered face for a moment.

For just a second some other unknown emotion, but a positive emotion, Heero suspected, flickered over Duo's dejected face. "Why?"

"You succeeded in your mission and are here alive."

The rest of the conversation barely touched Heero. It was all mission mode, all distanced. He held Duo's hand, the swollen and dislocated finger looking like a bad training experience. He took hold of it and fixed it in one smooth motion. Duo screamed. He kissed him. The kiss swallowed Duo's scream. Blue and violet eyes met for a moment, but Heero knew Duo was already gone. A first kiss during a painful first aide measure had not been one of the recommended experiences in either of the books he'd read. It worked for him though, even as Duo's body went slack, falling backwards towards the tub until he caught him, Heero's lips tingled, the kiss bright and lovely. Heero lifted an unconscious Duo in his arms, carried him to the single small cot they had in the apartment. He continued first aid, made Duo as comfortable as he could and set about waiting for him to wake.

Work filled his mind. He found the surveillance data that recorded Duo's beating. He knew his targets. He completed a hacking job for his handlers and before he knew it, Duo was up, leaning against the doorframe, a small cupcake in his hand. One eye was till swollen shut, and he knew what size boot Duo had been kicked by because the boot print was still on the pale skin, but when Duo smiled, the smile was so brilliant and bright that Heero was suddenly utterly glad he had a soul. Duo's smiles were cupcakes of life.

He could have a soul, if Duo could smile at him.