Teaser for The Wicked Red 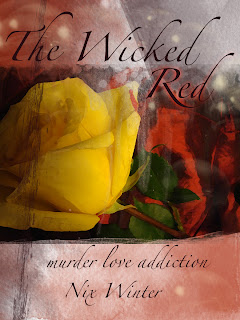 Simone Dubois had picked his higher power from a vision he'd had, a hallucination maybe, when he'd been doing one of the dumbest things he'd ever done. His plan hadn't worked, but the vision of the beautiful red headed man had sent him to the hospital to get actual help, had saved his life, and in the five years, two months, and sixteen days since, he'd convinced himself that his drug induced vision had just been pretty myth. He was never going to meet the man who'd found him, told him to go to the hospital, told him in a very sharp British accent that he was an utter fool if he let life slip away. Posh red headed gay boys with violet eyes and melting honey British accents didn't frequent the worst parts of town where the best of intentions crushed up against unbending self hate and the garbage compactor of poverty and the criminal justice system.

"Simone?" Robert asked impatiently. "You're in the weeds, man."

Where the maybe fifteen people standing at his bar had come from, he wasn't really sure, but it was probably a safe bet that they had already told him what drinks they wanted. He grinned charmingly, tossed the glass he'd been polishing up so that it spun three times and came back down into his hand elegantly.

One of the customers leaning on his bar, eyes narrowed in annoyance was a regular, so Simone wiggled his eyebrows. "White Russian?"

The pink haired man softened a little. "If it's not too much trouble."

Simone winked, drink already half poured. "Sorry about that, Rin."

Drinks poured then, fast, flying, a bottle in each hand, cocky grin soliciting orders and controlling the crowd as if he were meant for this. His showmanship drew the little red head. Simone was a beautiful bartender, tall, blond, green eyes, and the confidence of an accomplished stage magician. His eyes never completely left the shy little red head and when the red head made it to the bar, the rest of the people waiting for drinks might as well have been an old black and white movie.
"Hello," Simone said, a bar towel in one hand, both hands on the counter and every ounce of charm he could muster in his smile. "What can I get for you?"
The red head cleared his throat, neatly manicured fingers laced together as he stared at Simone with the confusion of seeing an exotic wild cat close up for the first time. "Well, you see, the gentleman that was with and I, we had a disagreement. My phone came to an unfortunate end and now I need to call a taxi, but I can't find the pay phone."

"Thank you,"  Red said politely, "I've had quite enough date for the evening."
A flash of uncertainty, of vulnerability went through Simone. Neither of them broke eye contact. Without breaking eye contact, Simone mixed a green apple martini... and pushed it across the bar. "You haven't been on a date with me and I've been waiting for you for five years. I'll be off work in a couple hours. Then I'll take you anywhere you want and in the mean time, food and drinks are on me." At the end of that overly serious, Simone grinned, a childish and infectious grin. He held out his hand. "I'm Simone Dubois. Tell me your name?"
Alex reluctantly reached out and shook Simone's hand, but once their hands connected his face relaxed and a very slight blush lit up his cheeks. "I'm Alex de Graffe."

"I'm very happy to meet you Alex de Graffe. What do you drink?"

"Usually just a little wine. What is this thing," Alex asked, just as reluctantly pulling his hand back as he stared down at the neon green apple martini, "that you've given me?"

Alex lifted the martini, sipped it, chewed at the edge of his lip, then took another sip. "Why on Earth are you offering me champagne. I've no intention of paying or tipping."

Simone propped an elbow on the counter, stared into the most utterly beautiful twilight eyes. "That's okay. Like I said. It's on me."

"I also will not be having sex with you." Alex sipped the martini, eyes narrowing, but not looking away.

"It's a couple hours till I get off work. You might like me better by then."
"I shall tell your boss that you're being inappropriate with a patron." Alex threatened without emotion, testing, watching.

Simone's grin grew crooked and he gestured towards Robert, who was managing the growing crowd of drink seekers by himself. Robert frowned furiously, pointed the bottle of rum in his left hand at Simone and grimaced. "I'm keeping all your tips for the night."

"That's my boss. He's my partner in crime. He knows you're the only one whose ever caused this kind of insanity in me."

"What are your tips likely to be for a night?"

"It's Friday," Simone hedged, "If it's good tonight, I might pull $800 in tips."
"Is that a lot of money to you," Alex asked, some of the not under poured martini beginning to hit him.

"It's not nothing," Simone allowed. "Look, this isn't something I normally do. It's just... you're special."

"What are you basing that on? My unusual coloring? Do you have a fetish for violet eyes, Mr. Dubois?"

"And if I do?" Simone asked, not sure that he didn't. He pulled a menu from under the bar. "Pick something, please? I'll get that champagne. Let me help Robbie catch up and I'll be back. Just don't leave."

"How can that possibly be so important to you," Alex asked. Dressed in a suit more appropriate for a museum than a gay night club, silk tie, un-calloused and manicured finger tips caressing his martini, he looked more out of place than a Renoir in a poster shop.