Down the Rat Hole 1/?
by Pink Whirlwind
Disclaimer: I do not own Gundam Wing, Bandai does. I'm just enjoying the fandom.


"Oh great lord," Sister Elena hissed. "How old can you possibly be? And you're the only one that can help?"

His paperwork said he was Father David Alexander. A lean man in blacks just slightly too large, even after they'd been taken in by hand, his braid hung to his eyes, and there was a dangerous predatory chill to his violet eyes that left the good sister's blood a little colder. "I'm twenty-eight," he said as he respectfully dipped his fingers into the holy water before making the sign of the cross. "Sister, it is better for you to leave the details out of our control up to God. I had been scheduled to celebrated God's beneficent grace at a different conference, with some close friends of mine, before I heard about you possession. It was only by God's everlasting grace and my partners' excellent self-sufficiency that I am able to be with you now. In this time of war, so any people need God's attention, you understand."


"Yes, yes, of course, Father," she said, also making the sign of the cross and stepping back away from the man you had come to help her. "Recently, we've had such good fortune. Almost all of our children were adopted and the local government was able to take the remaining dozen. The church just hasn't had the resources it once had, with the war, and the tragedy that happened here," she paused to whisper, "before."


Father Alexander nodded, his jaw tight, as he walked back into what had once been Maxwell Church, but was now called Chapel L2-5983. "It was a terrible loss."


"They say," she whispered once they were inside the dark hall of synth-stone, "that the sole survivor was a boy and that he was possessed by the devil. Some people even say that he's the one that started the massacre, so I worried a great deal when one of the boys came back... after he was adopted, you see, and he's.. strange now."


Father Alexander nodded, face calm and impassive. If Heero had been there, there would have been a time out, a re-centering, unless they'd been under the most life threatening and deadly circumstances.


"Show me to him, Sister," Alexander commanded, firmly, the benevolent father. "So the L2 government adopted about a dozen of your children? Was this boy with the?"


"He was," she said, "But he came back with... things and he begged me not to send him back, so I thought, I'd seek your guidance instead."


"Very well done, Sister," Father Alexander said, forcing himself to feel warm positive emotion about the skinny nervous sister in front of him. "You've kept this with the Church?"


It was the way she said it and he knew she was lying.


"You are forgiven," he said softly.


A look of complete relief spread across her face, though she was already backing away from the door
she'd lead him too. "Thank you, Father."


As soon as she was out of range, Duo pulled out his mini tablet, scanned the door knob's temp, in case
it was connected to any electrical devices, scanned the temp of the room beyond and felt comfortable that there was only one person, a pre-adolescent boy, inside. Jaw tight, he opened the door, gave it a shove, as he leaned against door frame, which would do him no good at all if the people inside were either expecting him or at at least the level of tech he did. When no one shot him, he stepped into the room that felt ... felt as if it had been where Father Maxwell's private study had once been. "Hello?"


"Zombies want to eat me inside out," a small voice half begged.


Duo blinked, willing down his infrared lenses. The boy had excessive heat in his arms, at his temples.


"Jason. You're Duo Maxwell, Pilot 02, in the top ten most wanted. My head hurts so bad. Can you make it stop. Transferring - five hundred units. Process update, seventy-five percent."
Duo continued scanning the boy, looking for signals, clues. "Jason, do you know what's happening to you?"


"I'm scared," Jason said, eyes big watching Duo as if he had some kind of answer.  "I think they're going to hurt my sister. Do you have a sister?"


"No," Duo said, feeling really sad that he'd come all the way here for... something... Trowa had said it was a stupid diversion. Heero had understood, but he and Heero had been sleeping together for six months and that was forever in the war. He knew for certain that the kid wasn't possessed, that the sister was complicit, and it was probably a trap set up exactly for him. He and Heero had suspected that before he'd ever left on this fool mission. In a war of guerrilla strikes against threat and intimidation, knowledge was everything. Heero'd had a plan. "Where's your sister, Jason?"


"You shouldn't go there," Jason signed, while his mouth gave the location.


"Why," Duo signed back, interested to see if the boy could see in the dark, as he'd expected Duo to be able to.


"They're waiting for you," he signed back.  "You're going to save my sister? They have twenty children that they're experimenting on."


"That's what I came here for. I'm going to stop them," Duo said, but signed, "Don't worry."
Duo slipped his tablet back into his sleeve, stood.


Just outside the door he found the sister, wringing her hands. "Will he be okay?"


"He's not possessed," Duo said, expecting she knew this already. "His adoptive 'parents' experimented on him. There is a heaven, Sister, and a hell."


"And where do homosexual priest impersonators go?"


Duo grinned brightly, "Oh, hell, probably, but hopefully not today. Can't you even imagine a world where we'd all be free?"


"I'm free. It would be a better world without terrorists like you. You're just a boy. Repent."


"Oh it's too late for that, Sister. You know that boy, the one you who survived the Maxwell Church
massacre? That's me. The only time I've ever been happy is when I'm with my boyfriend. War sucks, been there up close and in first person. I'm really just trying to stop the war, you know?"


"There won't be a war if you surrendered.  You're just children. If you surrender, there can be clemency for you and your friends."


"You mean clemency like a quick and painless execution? No thanks. You tell'em I'm coming and if they've hurt those kids I'm gonna kill'em all and then I'm comin back for you, sweetheart."


He bowed, still grinning like a maniac. The hologram presentation that was him went salt and peppered with static and the good sister actually cursed. She touched her ear. "The little dick is gone, probably out the window or up to the next floor. Terminate Jason and get ready. That murderous little fucker is on his way to you!"

And a pic for the next chapter 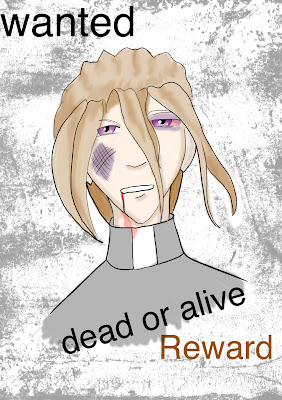