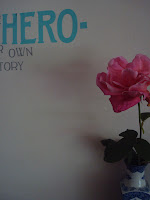 If you could have lunch/dinner with one author, who would it be? What sort of restaurant would you select for the meeting? What would you want to ask him/her? How would you expect the conversation to go? Paint a written picture of the event.


There are so many great writers that I'd like to meet! Julius Caesar!  Geoffrey Monmouth - the first person known to have written about King Arthur... I would love to know what he knew, where those stories came from! Voltaire or Benjamin Franklin! Can you imagine tea with Benjamin, Voltaire and Rousseau? Those would be some dangerously spicy cookies.


I'd like to say that I'd have really amazing questions to ask them, world shattering questions. I'd like to get some clarity on what they thought being a deist meant and if Benji really wanted to see the United States as the evangelical home base from which they'd impress their religion on everyone's life style. I'd ask Voltaire what he thought of Newton. That would be a lovely and polite question.


How wicked of me is to want to know who he slept with at court? If he ever did Louis XV or Madame de Pompadour.


I want to know what Benjamin Franklin saw at the Hellfire Club.


So we'd have a late tea, in a lovely salon. I'd pass as a lovely young American man, in a smart grey suit, perfect lace at my throat, and big silver buttons.  The hostess of the salon would welcome me. I'd sweep my hat from my head, bow, draw her fingers to my lips and tell her that she was the most beautiful lady in all of Paris.


The private room where I would take tea with my fellow gentlemen would be done in a light shade of blue, vases thick with white roses that drift beauty across the room.


Voltaire and Benjamin would sit near each other, sipping from pretty porcelain cups, though I don't really think it's tea. Both of them are dressed very well.


Rousseau is dressed a little shabbily and obviously very unhappy to be in a room with Voltaire and Benjamin. He's sitting far away and being a good Calvinist, I'm pretty sure he is drinking tea.
I want to ask him about the six children he abandoned to die and how he thought he ought to write books about how to raise children.


The moment I step into the room though, my throat closes off and I think the only treat I'll get is breathing for a few minutes.


Voltaire rises and he's beyond beautiful and graceful, the consummate entertainer and blogger of his day. My mouth goes dry as he smiles at me.


Benjamin presses a tea cup into my hands, but it's not warm and it smells very like rum.
"So what is your name? You're an American, right," Benjamin asks.


I smile, but think it's more of a twitch. He's so much younger than I thought he would be. He had grandchildren when he met Voltaire. They're both Freemasons and I'm utterly male. I could ask for membership. I sip my whatever it is and it tastes a great deal better than I thought rum tasted, but it does nothing to loosen my tongue.


"I think he must have had a very hard time," Voltaire says scooting his chair a little closer. "You are a Republican, aren't you? From America?"


I clasp my hand over my mouth to keep. "I'm a Democrat," I manage. I'd had so many great plans! This was all supposed to go so very much better. Voltaire has such beautiful dark eyes, so full of intelligence.
"A democrat," he mulls, "So you think everyone should vote?"


"Of course everyone should vote," Benjamin said firmly, "for their representatives. The fellow is a fine American, if a little too enthusiastic. You haven't hit your head, have you? I'm not sure if you're pale or flushed. You're not frail of health?"


"No, no, I'm not," I croak, taking another long drink of whatever is in my cup, wishing it were really liquid courage. "I'm a writer."


"A writer, you say," Benjamin says, giving his knee a slap, but somehow he makes it look sexy, rebellious. "I've written a few things."


"I expect his books are banned," Voltaire says, giving me a smile that ought to be banned. I'm pretty sure some of his intent should be banned, but that doesn't make speaking to them any easier.
Just as suddenly, I'm back in my own time, laying back on the vacation couch, a pretty sky blond young man peeling sensors from my temple. "Did you have a good trip? The very short one's never seem like quite long enough to me, but sometimes it can be very intense. Did you feel like you had enough time?"


I cover my mouth with my hand. The sweet sugary rum flavor lingers. "Yes."


"You went to see Voltaire and Benjamin Franklin? What did you want with those two old guys?"
My smile ought to be banned. "They weren't always old."


"So did you learn anything?"

Angelika Devlyn said…
re: I want to know what Benjamin Franklin saw at the Hellfire Club.

So would I, now you say it!

Great story! I wrote a story, too, but love yours much more!